For a same theoretical potential over 20 000 TWh/year:

Most past designs of tidal plants have been devoted to best sites of few countries. However the proposed solutions appear usually too expensive in the very specific conditions of tidal energy: very low heads for plants, too low water speed for in-stream turbines, huge waves.

A new solution, the « Tidal Gardens » appears better adapted to these conditions and cost effective also for tidal range as low as 3 or 4 m, i.e. for twenty countries and for 1 500 TWh/year instead of few hundreds TWh/year in few countries. 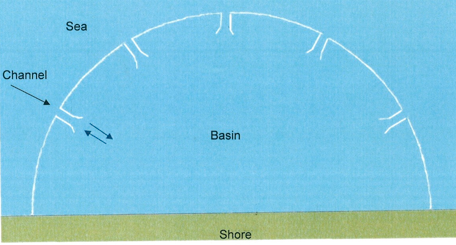 Typically a basin of some hundreds km² is created along shore by a long dyke; such basin is not linked to sea by power plants in the dyke but open to sea by wide channels some hundreds m long in which are placed 5 to 10 rows of in-stream turbines. The channels may be closed by gates. The turbines operate both ways in optimal conditions with an even speed of about 4 m/s controlled by the number of rows in operation and the gates opening.

The length of channels and the number of rows implemented are proportional to the local tidal range which has thus a limited impact on the cost per MWh. This solution may thus apply to many countries. 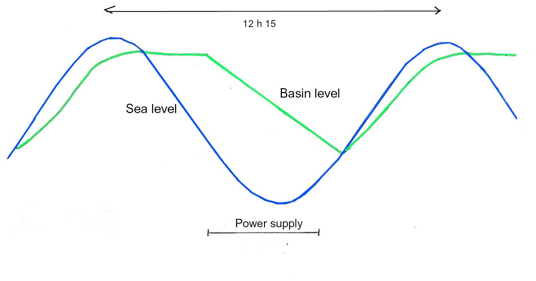 Technical data, operation, potential, costs, impacts are analyzed in the Congress written report and in various 2014 Issues of “Hydropower & Dams”; they are summarized below and completed by a presentation of huge extra facilities from such schemes and of the potential in various countries.

The relevant capacity of turbines is about 0,2 H²S in MW, as average
5 MW/km² of basin. The total width of channels is about, in m, SH.

The overall cost of channels and turbines in the range of 50 $/MWh.

The cost of dykes which appears between 10 and 50$/MWh for analyzed large schemes.

Analyzed in the written report, they appear generally more favorable than detrimental and globally much better than impacts of hydropower.

The key point is that the two ways operation by Tidal Gardens keeps in the basin most natural conditions including tidal range.

There is no need of resettlement.

The impact of a dyke failure is much less dangerous than a dam failure.

Protection of shore and basin area

Exceptional high water levels will be avoided and, if advisable, the usual high water level may be reduced by about 1 m; this may be extremely useful close to flat shore for avoiding loss of lands or favouring reclamation. It applies as well to large deltas during exceptional floods and may then reduce inundated areas.

Avoiding high waves favours many investments along shore, such as for tourism and reduces shore protection maintenance.

Conditions in basins are optimal for fish farming, with low waves and some water speed.

Very large harbours may be created 10 or 20 km from shore in deep water with road access, completed by industrial platforms reclaimed by sand dredging. 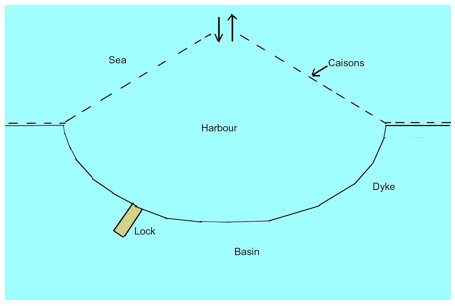 Fishing or yachting harbours may be created at dykes ends.

All extra facilities above for energy, protection, shipping, industries may pay a part of dykes cost and the total economic value may be double of the tidal investment. 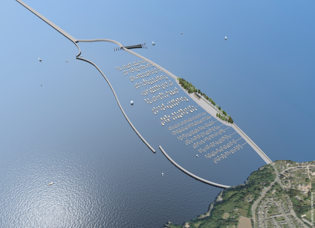 Potential in some countries

A preliminary rough evaluation may be based upon the tidal range and the sea depth, avoiding for dykes the places where the sea depth is more than 20 or 30 m under the low water level. And the length (and cost) of dykes should not ne too important for the benefits. This favours large schemes and/or gulfs. Small estuaries such as La Rance are a very small part of the potential and do not represent the usual conditions.

Studies and potential in France

Since 40 years, studies have been made in France for tidal energy supply or storage, with single or associated basins operating one way or both ways, for small or very large schemes, along shore or totally offshore, with bulb units, orthogonal turbines, in-stream turbines.

The realistic potential has been now increased by the “Tidal Gardens” solution (Maréliennes in French) and may extend to Atlantic shore.

It may include 8 large schemes totaling over 120 TWh/year. Three are presented below totaling 70 TWh/year as much as present French hydropower.

Smaller schemes may be implemented first including the possibility of doubling the Rance supply by a channel of Maréliennes. 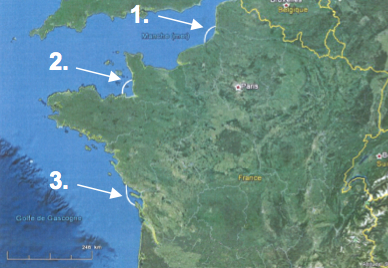 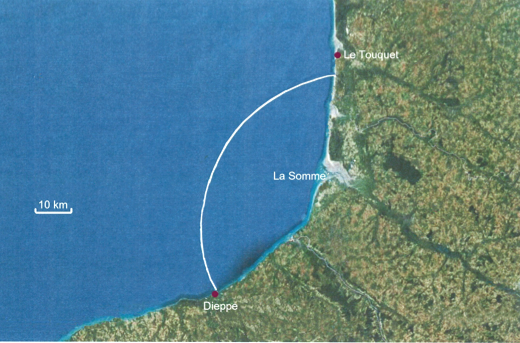 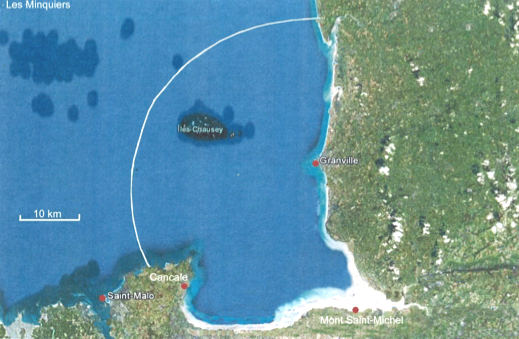 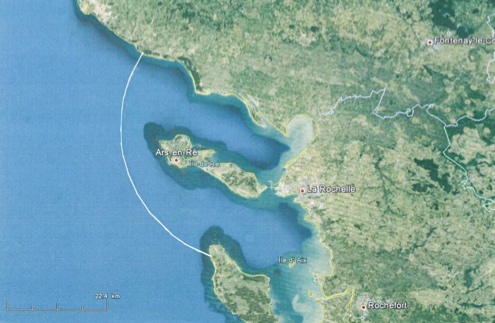 Most studies have been devoted to the Severn area where average tides reach 7 m. Using there “Tidal Gardens” may increase significantly the potential at lower cost and the 2 ways operation is favourable to environment. 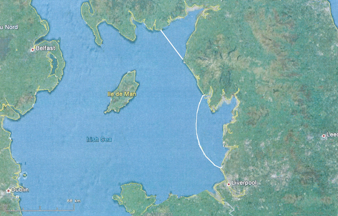 Russia has studied since decades the promising solution of orthogonal turbines operating both ways under low head.

However the cost per MWh, especially of civil engineering, increases significantly for tidal range under 6 m; using the “Tidal Gardens” solution for very large Russian areas of 4 or 5 m tidal range may be of interest.

In Europe, tidal energy could thus be used not only in Mezen, but possibly in Cheschskaya and perhaps White Sea up to 100 TWh/year, 1000 km from Moscow.

In Siberia, the Tugurskaia site could be much increased, and power up to 100 TWh/year used in Siberia, Japan and China.

The very huge scheme of Penschiskaya (200 TWh) seems too far and too cold for a cost effective utilization. 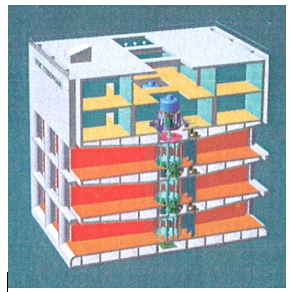 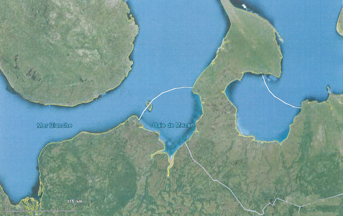 2 sites in Fundy Bay could supply up to 40 TWh/year at a cost of 50$/MWh rather close to Montreal or New York.

The potential is higher in Ungava Bay but the cost probably over 100$/MWh. 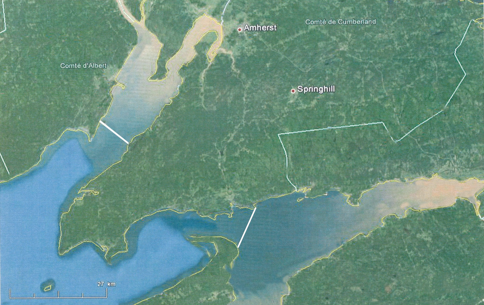 In Argentina the best sites seem in Gulfo Nuevo with tides of 4 m but short dykes. The potential seems up to 30 TWh/year. There is a specific problem of Whales.

There is a tidal potential of 50 TWh/year in Patagonia which may be associated with huge wind farms for energy supply and storage.

Power could be delivered to Buenos Ayres. 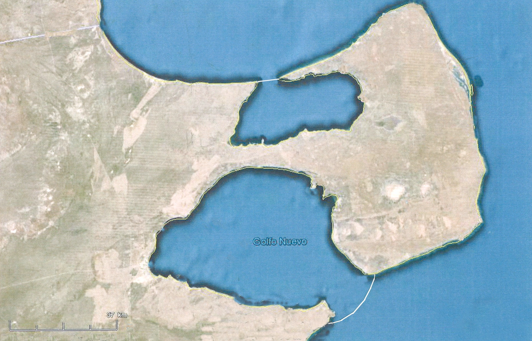 Many studies did focus on sites of some hundreds MW using bulb units for average tides of about 6 m. The cost was acceptable in Shiwah for specific reasons.

There are very large areas in Korea with tides of 4 or 5 m and Tidal Gardens may thus offer a potential well over 50 TWh/year at a cost under 100$/MWh. Huge extra possibilities such as wind farms, energy storage, shipping facilities, shore development could pay for a part of dykes. The corresponding area is represented below. 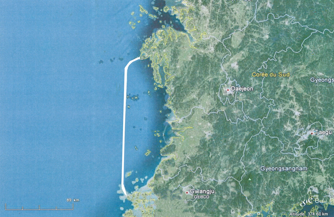 The two best sites are in North West in India Gulfs of Kutch and Kambay where 50 TWh/year of tidal energy could be associated with solar energy supply and storage. 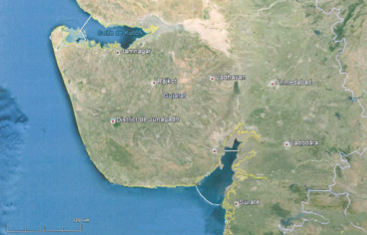 Gulfs of Kutch and Kambay

There are also huge possibilities in the Gulf of Bengal for India and Bangladesh: shore protection could be a key target for dozens millions peoples and such schemes could become realistic mid century.

There are some possibilities in Pakistan. 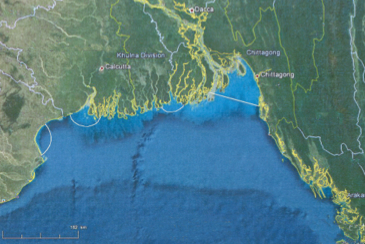 Countries with tides of 3 or 4 m

Larges schemes may be cost effective, especially if a part of dykes may be paid by extra services such as shore or basin development, wind energy …

China may well implement over 100 TWh/year along 2000 km. Control of water level may be of much interest North of Shanghai.

Northern Coast of Brazil West of San Luis offers much possibilities. Optimizing Amazon level may not be an utopia.

Vietnam may supply 15 TWh/year and optimize the Mekong Delta level.

Germany and Netherland may each supply 15 TWh/year for about 100$/MWh and get many facilities beyond tidal energy supply.

There are some possibilities in Ireland.

5 000 km of dykes about 30 m high, a channel sluices capacity of 5 millions m², a water storage every day of 500 billion m3 (10% of total yearly dams storage) are well in the scope of ICOLD activities, but technical problems, design criteria, impacts, safety problems are very specific.

Over 80% of the potential is in large schemes of some GW to be implemented after 2025. Within the next decade, dozens of smaller schemes of some hundreds MW may be built, with construction schedules of about 3 years and will optimize turbines and dykes designs and check the impacts. Their cost per MWh may be somewhat higher than very large schemes.