A new solution for tidal energy has been presented in detail in Hydropower & Dams 2014 – Issue One; corresponding potential is evaluated below for Asia.

In Asia the theoretical potential of Tidal Energy is close to its hydroelectricity potential but the tidal power supply is limited to 0,5 TWh/year when hydropower supplies 1 500 TWh/year.

The technical solutions studied till now for tidal energy were too expensive:

–   It is possible to create large basins along shore but the corresponding available head from tides is too low for a cost effective utilization of traditional turbines: bulb units are too expensive for heads under 3 m or 4 m when the best utilization of basins is for heads of 1 or 2 m. Russian orthogonal turbines seem more attractive but the cost of civil engineering remains high, and very high for most tidal ranges in Asia

–   In-stream turbines may be prefabricated at an attractive cost but water speed is usually too low and the operating conditions in open sea too expensive for a significant realistic potential.

A new solution, as presented in detail in Hydropower & Dams 2014, Issue 1, may have a great future in Asia because it is cost effective as well for tidal range over 6 m, exceptional in Asia, as for tidal range between 3 and 6 m which are common for many Asian Countries.

This solution uses (fig.1 and 2) large basins along shore open to sea by wide channels in which are placed 10 or 20 rows of in-stream turbines; they may operate in best conditions of water speed, marine conditions, short electric links and maintenance facilities. The cost per kWh of turbines and channels will be quite the same for natural tidal range of 3 or 6 m because the cost of turbines will be a world cost and they will supply yearly in any site 3 500 or 4 000 hours of the rated power. They will operate both ways as per figure 3.

This specific design may have the specific name of “Tidal Gardens” (or T.G.). As the water levels and tides within the tidal basins will be quite the same as natural tides (fig.3), and huge waves will be avoided, the environmental impacts will be better than from other renewable energies.

And this solution may have, especially in Asia, very useful indirect impacts thanks to very large calm areas and shore protection by dykes such as:

–   to devote few per cent of the calm basin area to large energy storage by pumping plants which will be more cost effective than traditional mountain pumping stations.

–   to reduce by 1 or 2 m the highest natural water levels: this may be very useful in flat shores, especially to avoid impacts of oceans level increase.

–   to create by dredging artificial islands along the main dyke and to place there industrial areas with access by low cost harbours.

–   wind farms, tourism and aquaculture may be favoured.

Very rough evaluations are presented below, based upon tidal range and topography. The cost per MWh includes the cost of turbines and channels which may be similar in most countries and the cost of the main dyke of the tidal basin which varies which each design.

Rough evaluations of cost have been based upon topography and possible designs. Water depth is favourable within 20 or 30 km from shore along many Asian countries. The conditions of foundations are often favourable (sand, gravel, rock) and may be managed for finer materials; however it is possible that evaluations below are too optimistic in some countries for various reasons.

Some comments about utilisation of “Tidal Gardens” (T.G.) are given for China, India, Russia, South Korea, Pakistan, Bangladesh, Vietnam and Indonesia. There are also significant possibilities in Myanmar and North Korea.

Figures are very rough evaluations but it should be easy in each country to precise these evaluations of potential and cost. The main purpose of these comments is to draw attention on possibilities of very large cost efficient schemes for usual tidal ranges in Asia such as 3 or 5 m.

Most past studies have been for rather small schemes with higher tidal ranges.

There are few places with an average tidal range over 5 m but there are two thousands km where the average tidal range is close to 3 m and the sea depth under or about 20 m within over 20 km from shore. The technically and economically potential visible seems thus over 200 TWh/year. Implementing 50 or 100 TWh/year seems a reasonable hypothesis with the huge indirect relevant possibilities of energy storage, wind farms, shore protection. The cost per MWh may be under 100 US$/MWh.

–   The two best sites are the Gulfs of Kutch and Bhavnagar in the North West India. They may total 4 000 km² with a tidal range close to 5 m and supply up to 50 TWh/year. They may include much energy storage and may thus be associated with a very important solar energy. The cost may be under 100 US$.

–   There are also possibilities in the Gulf of Bengal (fig.8) with a tidal range of 3 m and very large areas with limited sea depth. The potential may reach several dozens of TWh/year with possibilities of shore protection and water level control. This cost will be higher than for West sites. The tidal range is 3 or 4 m along hundreds km and the sea depth favourable within 20 km from shore. A supply of 10 or 20 TWh/year may be cost effective with the advantage of shore protection.

The potential of the Okhotsk Sea may be the largest worldwide. The Northern site, Penzhinskaya, has been evaluated for 80 GW!, i.e. over 200 TWh/year. However it is extremely cold and 3 000 km apart from needs and the cost higher than for the Southern site.

The studies of the Southern area have been mainly devoted to the site of Tugurskaïa with a supply of 10 or 20 TWh/year. Using the new solution applying well to most tidal ranges favours a much larger utilization of this Southern area, possibly up to 100 TWh/year. Such supply may be welcome, not only for Siberia, but also for China and Japan (fig.5).

The proposed method of construction is essentially based upon prefabricated caissons and large sea dredges; most local concrete is under water. The extra cost for climatic conditions may thus be acceptable as well as a 1 500 km electric line. The overall cost for this power delivered to Siberia, Hokkaido or Harbin may be attractive in 2030, between 100 and 150 US$/MWh. The Shiwah plant and recent studies have been mainly devoted to rather small schemes where the tidal range is high. The cost based upon the utilization of bulb units is hardly acceptable.

The new solution (Tidal Gardens or T.G.) which applies as well to tidal ranges of 3 to 5 m offers a cost effective potential which may be 50 to 100 TWh/year because there are in the Western coast 10 000 km² with a tidal range close to 5 m and a sea depth in the range of 20 m. A possible lay-out is as per figure 6 and may be in several phases.

The relevant schemes may be associated with energy storage, wind farms, industrial development and shore protection. And the power supply is very close to needs. 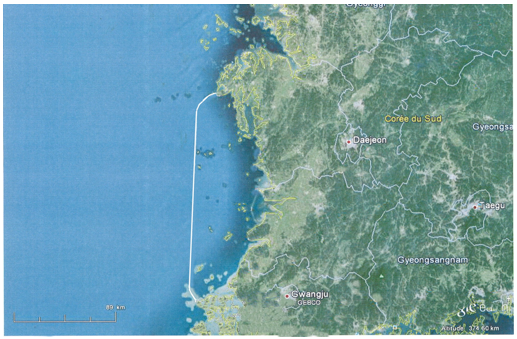 The tidal range is about 3 m along 300 km and the possible tidal power supply seems limited to 10 or 15 TWh/year.

Beyond the cost effective energy supply, a key advantage may be the possibility of optimizing the water level at the Mekong Mouth and thus to avoid there the damaging impact for ten million people of oceans level increase.

However this possibility is linked with the soil conditions under dykes. They may be better 10 or 20 km from shore than immediately at the Mekong Mouth. It may be utopian to consider the possibility of a very huge scheme as suggested in figure 8. It may be not.

The advantages may be enormous for getting in South Bangladesh the optimum water level, even during huge floods and high tides. Power supply may reach 50 TWh/year and appears cost effective.

However two drawbacks may be very important:

–   The investment is very high but should be probably after 2030 and a part of power and investment could be for India.

–   There is an uncertainty about the soil conditions under the various possible lay-outs of dykes and about the corresponding solutions and costs; but it seems possible to get at low cost some informations for evaluating easily the seriousness of the challenge.

Considering huge works realized in Netherland eighty years ago in poor soil conditions, a solution which may appear utopian now may be realistic within 20 years and very useful for 50 million people.

If soil conditions are acceptable, the total cost of the scheme could be in the range of 40 billion US$ for 50 TWh/year, less expensive than most other energy sources.

A first phasis could be 20 billion US$ including the main dyke and water level control and part of power. 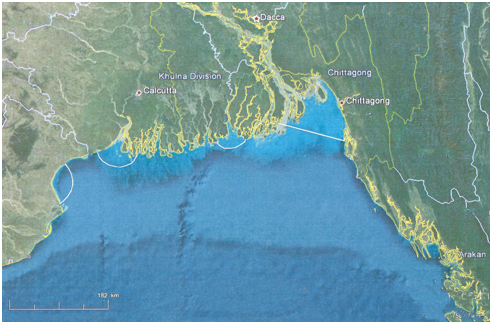 Smaller sites may be used earlier.

.   The Eastern site with over 50 TWh/year which is cost effective with the T.G. solution and rather close to main Australian needs.

.   The North West site which may supply 100 or 200 TWh/year at very low cost; it is 3 000 km apart from main Australian needs but 1 500 km from Java where such power could be very cost effective in the range of 100 US$/MWh. Caissons and turbines could possibly be made in Indonesia.