The analysis below and proposed scenario for 2050 are based upon International Energy Agency (I.E.A.) data and likely unit costs, on proofed technologies and on usual hypotheses for world population and energy needs in 2050.

But the analysis and presentation are unusual on three points:

– The present and future needs are not expressed as usually as “Primary” or “Final Energy” but in Really Used Energy (R.U.E.) which is about half of the “Final Energy”!

–   The analysis is separated between South countries under the 35th North parallel generally warm and North countries including China, colder and presently more industrialized.

Most past evaluations are in T.O.E. (Tons of Oil Equivalent), which is confusing because the energy used from a ton of oil is much less than a T.O.E.

Presentations below are in kWh or TWh (billion kWh). One T.O.E. equals 11 630 kWh (the share of energy through electricity will probably increase from 1/3 now to 2/3 in 2050 and kWh is a well understood unit).

–   One usual reference is the “Primary Energy”, i.e. the total energy available in basic fuels. Its total value in 2011 was 13 100 millions T.O.E. (i.e. 152 000 TWh). According to sources and utilizations, the really used energy is 10 to 80% of the Primary Energy which is adapted to comparizons between fossil fuels but not at all to studies of Renewable Energies. It has some meaning in 2011, not at all for 2050 studies.

–   The other usual reference is the “Final Energy” which was 8 900 millions T.O.E. in 2011 (i.e. 105 000 TWh). It is the energy included in refined fuels and electricity as available to the consumer. It is a confusing name because it includes:

.     Losses before utilization which may be very high.

“Final Energy” and Really Used Energy are accordingly compared below (based upon IEA data):

Hypotheses on coefficients could be modified but the following key points should be unchanged:

–   The Really Used Energy is much lower than the “Final Energy”.

The total Really Used Energy from various sources is in thousands TWh.

1. The countries which use less energy and emit less CO²/capita than the world average; i.e. Asia (except China, Japan, South Korea, Middle East), Latin America and Africa. They are about 3,8 billion people, quite all in warm climate, lower than about the 35th North parallel. They will be called below the South countries.

2. The other countries, i.e. Europe (including Russia), Middle East, China, South Korea, U.S. and Canada, Australia and New-Zealand, i.e. 3,2 billion people. They will be called below North Countries because 95% of their population is above the 35th North parallel. Most are colder and more industrialized than South countries.

Some comparizons are given below for 2011, based upon I.E.A. data, for CO² emission, Really Used Energy (shared according to shares of TPES). Income (GDP) and adjusted income (PPP).

Comparizons between South and North countries for 2011 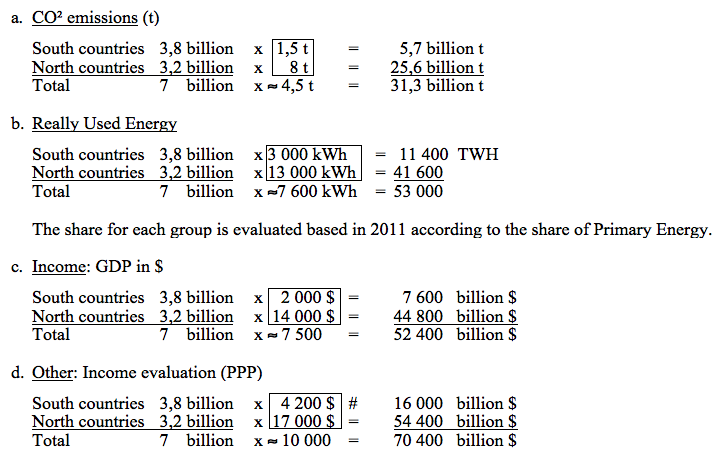 It is possible to summarize:

The income, Really Used Energy, and CO² emission per capita are in North countries, about fivefold those of South countries.

Accordingly the Real Energy Utilization would be in 2050:

As the share of gas may increase and share of coal reduce, the acceptable share of Really Used Energy from fossil fuels in 2050 could be 2 500 kWh/capita.

This share, i.e. the right of pollution should be the same worldwide.

Or with an other evaluation (PPP):

It is necessary to use fossil fuel for about 20% of the electricity for grid flexibility (preferably by gas), oil for at least half of transport, AND SOME gas or coal for heavy industry. The technical cost of these utilizations will usually be lower than from renewable.

The gas utilization could be 90% of the present one, the oil utilization 60%, the coal utilization 30%. Nuclear is presently used for 4% of Really Used Energy. The same percentage of 68 000 TWh could be realistic, i.e. for about 3 000 TWh, essentially for North countries. It is unlikely that it exceeds 5 000 TWh for reasons of cost, uranium availability, and safety.

The utilization of biofuels and geothermy will be probably mainly for low temperature heating or cogeneration. The present huge utilization of wood for cooking in Asia and Africa should be totally abandoned. Using these sources for a maximum of 5 000 TWh seems likely, mainly for the North countries (fuels are usually classified as renewable which is somewhat questionable because creating forests may be less or more important that using them for energy).

Hydropower production is presently 3 500 TWh, mainly in North countries and may reach a maximum of 8 000 TWh (including mini hydro and tidal energy). Due to transport and losses, the corresponding Really Used Energy will be about 6 500 TWh and about 30 000 TWh of Really Used Energy would be supplied by wind or solar.

Quite all South countries have solar energy along all year and some solar reduction in rain season may be balanced by more hydropower. The problem is very different for North countries where the solar energy is much reduced during winter when needs are higher. And solar energy has little future over the 50th North parallel. Most solar energy will be through PV (Photo Voltaic) with some CSP (Concentrated Solar Power). Direct utilization, especially for heating, will be probably much less important.

There is wind in great majority of North countries and for over 60% of South countries. It may thus be a key source of energy, a part being offshore. Accordingly:

The total energy used from solar may be 18 500 TWh of which 14 through electricity.

The total energy from wind may be 12 500 TWh, through electricity.

–   It is possible to appreciate which is the “Final Energy” corresponding to this scenario, using the same coefficients as used for 2011 (page 2).

–   The “Primary Energy” of this scenario, calculated according to present rules should be in the range of 120 000 TWh or 10 billion TOE, i.e. 20% less than now for a Really Used Energy 30% higher. Primary Energy is not a reference adapted to future.

–   Three options have been overlooked: CO² storage, hydrogen; 4th generation nuclear plants because their likely cost is unknown and their impact possibly very low in 2050. But they may favour later a further reduction of CO² emissions.

A drawback of solar and wind energy is their intermittence which may be acceptable without storage if their production is 20 or 30% of a grid using much fossil fuels but a significant storage may be required after 2030:

The investment for P.S.P. will be essentially after 2030 when the share of fossil fuels will become much lower. The evaluation of P.S.P. optimal utilization is very hazardous but the key finding is that the storage problem may be solved at a very acceptable cost.

The production of electricity will be about 20% higher than the relevant Really Used Energy; for taking care of losses including transport. The necessary production in 2050 may thus be:

According to evaluations by IEA for 2050, the average cost of PV could be about 56 $/MWh for large plants (minimum 40), i.e. for most production. South countries are favoured by more sun and low labour costs and a reasonable figure may be 45 $/MWh. A cost of 70 for North countries appears likely.

Similar costs are likely for CSP. For wind, average costs of about 60 $/MWh onshore and 80 $ offshore appear likely for South and North countries.

The average cost for solar, wind and hydro would thus be:

These costs are higher than the present (and perhaps future) technical cost from fossil fuels but the Really Used Energy will increase by 30% from 2011 to 2050 when the income will at least double. The percentage of the energy in the income will not thus increase. Even with 2/3 of renewable energy.

–   The cost per MWh from renewable in 2050 may not be higher than from nuclear.

–   But the electricity cost from renewable of about 70 $/MWh may remain higher than the technical cost from fossil fuels which may be under 50 $.

The cost for limiting the climatic risk seems thus globally very acceptable and much lower than the uncertainty on the increase of world income. The problem is the sharing of this cost between North and South countries.

– The global investment for renewable may be for electricity:

Fossil fuels utilization will be limited as well as hydropower supply. But there is no limit for solar and wind resources or for possibility of energy storage. There is thus no need of reducing progress of South countries of reducing the income of North countries even if energy needs are higher than foreseen above.

The corresponding extra cost will be a very small part of the likely income increase along 30 years.