Data for an easy design of P.K.Weir

One drawback of free overflow spillways is their low specific discharge. A standard Creager type profile has a unit flow in m3/s per metre length of spillway close to 2.15 h1.5, where h is the upstream head over the spillway crest in metre. Most usual spillways are therefore costly due directly to their length and/or indirectly due to the loss of storage or head corresponding to the significant upstream head required for the extreme flood.

For over 50 years, labyrinth weirs have been used to increase specific discharge at weirs. They are generally conceived as vertical walls with trapezoidal lay out. Most are for spillways with design discharges of between 100 and 1 000 m3/s and walls under 4 m high. The behaviour of these structures has been good. The vertical walls of such labyrinths may be built easily but they have three drawbacks:

–       Vertical walls are not hydraulically favourable for large discharges.

–       The base area they require cannot be found on typical gravity dam sections.

This solution has thus been used only for one per thousand of existing dams.

Since 2000, studies and model tests have been made in: France, Algeria, China, India, Vietnam and Switzerland for labyrinth structures which may be placed upon usual gravity dams cross sections. The designs tried to optimise hydraulic efficiency as well as structural requirements and construction facilities. Over 100 shapes were studied and tested: many solutions proved possible, but the most favourable designs are based upon two principles:

–  The lay out of walls has a rectangular shape similar to piano keys, justifying the proposed name of Piano Keys Weirs (or P.K. Weirs).

–  Those walls orthogonal to the flow are inclined. This is favourable hydraulically especially for large discharges and also allows the base width of the structure to be reduced, thus allowing its utilization upon most spillways or gravity dams.

A P.K. Weir design which appears cost efficient for most existing or new spillways is represented below. This model has an upstream and a downstream overhang of same length. The proposed ratio N between the developed plan length of wall and the overall spillway length is close to 5. An increase of this ratio does not usually seem cost effective.

Where this ratio of 5 is used, the proportions of other aspects of the PKWeir can be taken as follows, based on Pm (in metres) which is the maximum height of the labyrinth walls (see Fig.1 overleaf).

The suggested upstream head over the weir crest, h, should be between 0.4 Pm and 2 Pm .

As with Creager weirs, this estimated discharge may be reduced by 5 or 10%in the case of short weirs due to interference effects from the end abutments.

To improve the hydraulic efficiency when the design conditions do not limit the height of the P.K.Weir, it is generally more economic to increase Pm and to keep same proportions as suggested, rather than to increase the value of the N ratio. Suggested dimensions are of course only indications and are subject to optimization according to local requirements. Their efficiency may be easily checked in any hydraulic laboratory. 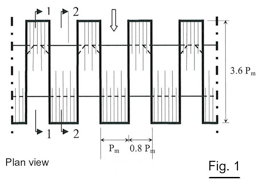 P.K.Weirs can be made of reinforced concrete, either precast or in situ. In the case of low height walls, thickness may be governed by practical steel fixing requirements. Where Pm is less than 2m, it may be simpler to adopt complete steel fabrication, with stiffeners if necessary. The cost per metre of spillway length is generally proportional to Pm.

Bracings between walls in inlets or outlets should be avoided because they could retain floating debris.

Simple pipes may bring air under the downstream overhang for avoiding possible vibrations.

As there is also much air entrainment in flows from P.K. Weir, energy dissipation is enhanced and, at least for moderate discharges, downstream erosion may be much reduced.

It is possible for the same discharge and same lay out to slightly modify the weir shape as shown on Fig. 2. This favours the early discharge of floating debris, while a stepped bottom outlet may also be incorporated in a stepped downstream part of the spillway. The choice may be linked with construction facilities.

For new dams compared to Creager type weir profiles, P.K. Weirs may divide by a factor of 3 the spillway length or by 2 the upstream head.

They may be used as emergency spillways associated with an existing or new gated spillway, using the freeboard for discharging part of any exceptional floods. For instance a freeboard of 4 m could be used to discharge an additional 40 to 50 m3/s per metre of spillway.

Various P.K. Weirs have been designed and built by Electricité de France.

Very large P.K. Weirs are under design or construction in Asia and Africa.