Concrete fuse plugs are simple massive blocks placed side by side on a spillway sill. They are free standing and stable until the water level in the reservoir reaches a certain elevation and they start tilting when this elevation is exceeded.

To ensure that the magnitude of uplift pressure under each block develops as required, a hollow area is provided under each block which is wide open at the upstream side and completely closed and watertight at the downstream side. Blocks placed on the same sill may have the same height P but different width E, so that they tilt at different water elevations according to increase of floods discharge.

A simplified formula “h= E – 0.4 P” may be used for a quick estimation of the water head “h” for tilting. 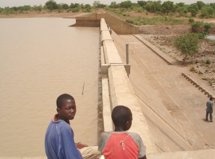 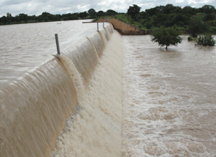 Plan view of the spillway

Concrete Fuse Plugs may be used for new dams. In such case, it is possible, with about the same quantity of concrete and cost as for Creager weirs, to double the flow of the extreme flood discharged through the spillway or to increase the storage for a same safety. They may also be used to improve existing free overflow spillways either by increasing maximum spillage, after lowering the sill, or by increasing reservoir storage or by combining both.

More details are given in Appendix 3 of ICOLD Bulletin n°144.