The drawback of traditional free flow spillways is their low specific discharge. The paper below shows how C.I.S. (Combining Innovative Spillways) may increase fivefold the discharge at low cost. Two spillways may be associated: PK- Weirs and Concrete Fuse Plugs.

This new solution of labyrinth shape is now developed in many countries as well for increasing the capacity of existing spillways or for new dams. It has been used for low discharges such as of 100 m3/s or much higher such as 5 000 m3/s and there are designs for dozens thousands m3/s.

The layout of walls has a rectangular shape, part of the walls is overhanging and those walls along the flow are inclined. This is hydraulically favourable and allows the base width of the structure to be reduced, thus allowing its utilization upon most spillways or gravity dams. The here below figures show a typical design of symmetrical PK-Weir with proportions based on “Pm” which is the maximum height of the labyrinth walls. Other configurations may be used case by case according to the local conditions (For instance, only one upstream overhang, or only one downstream overhang, or no overhangs, etc.). 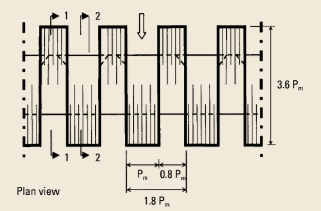 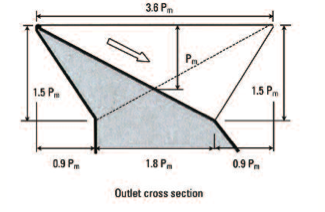 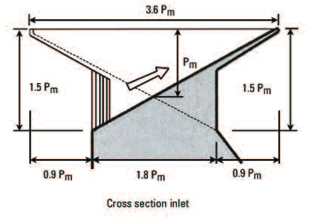 For a water upstream head over the weir crest (h) between 0.4 Pm and 2 Pm and a ratio between the developed plan length of wall and the overall spillway length close to 5, the discharge (in m3/sec) per metre of spillway is close for the model above to 4.3 h√Pm as compared to 2.15 h√h for a Creager Weir.

More details are given in Appendix 2 of ICOLD Bulletin n° 144. 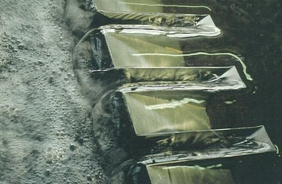 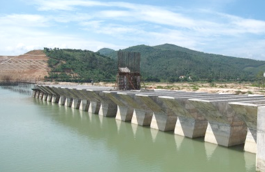 Concrete fuse plugs are simple massive blocks placed side by side on a spillway sill. They are free standing and stable until the water level in the reservoir reaches a certain elevation and they start tilting when this elevation is exceeded.

To ensure that the magnitude of uplift pressure under each block develops as required, a hollow area is provided under each block which is wide open at the upstream side and completely closed and watertight at the downstream side. Blocks placed on the same sill may have the same height P but different width E, so that they tilt at different water elevations according to increase of floods discharge. 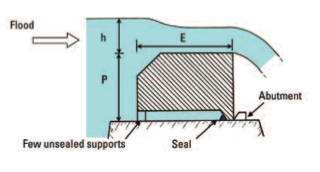 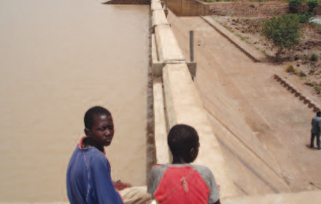 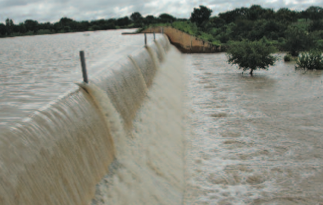 Concrete Fuse Plugs may be used for new dams. In such case, it is possible, with about the same quantity of concrete and cost as for Creager weirs, to double the flow of the extreme flood discharged through the spillway or to increase the storage for a same safety. They may also be used to improve existing free overflow spillways either by increasing maximum spillage, after lowering the sill, or by increasing reservoir storage or by combining both.

More details are given in Appendix 3 of ICOLD Bulletin n°144.

The plug width corresponding to the nappe depth causing titling varies with the exact shape and density of the plug and void under the plug; a specific study and test is thus advisable. Rough values are given for the drawing herewith.

For an upstream nappe depth h equal to the plug height, the plug width E is about 1,3 h.

Its discharge after titling will be 2,15 x (2 h)1,5, i.e. about threefold the discharge before tilting. It is the logical utilization of fuse plugs with before tilting a discharge of one third of the extreme flood, i.e. tilting and loss of plugs for a flood of yearly probability 1/100.

It should be more interesting to have a plug height equal to 3 h and a discharge after tilting 2,15 x h1,5 x (3 + 1)1,5, eightfold the discharge before titling: but tilting would happen for the yearly flood, which is unacceptable.

But this option may be used in association with PK-Weirs.

An example is giving below for a 50 m long spillway with a maximum nappe depth of h = 1 m.

For h over 1 or 2 m the weight of simple fuse plugs become very important. It may be better to use reinforced concrete structures as per fig.7, or similar to straight fuse gates with or without tilting system by uplift; 10 m high fuse plugs may then be possible operating with a 3m or 4m nappe depth, i.e. a possible discharge per m of 2,15 x (10 + 4)1,5, i.e. up to 100 m3/s/m associated with PK-Weirs discharging 40 m3/s/m, i.e. about 70 m3/s/m as average. 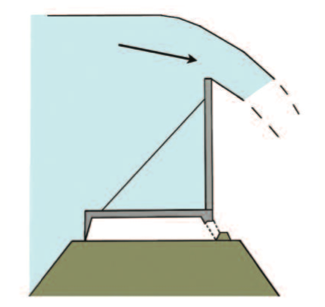 About fifty large or small spillways are using successfully Hydroplus labyrinth fuse gates which may have performances close to C.I.S. They design is more complex than C.I.S. but their cost may be in the same range, especially for improving rather important existing spillways.

Gates may be necessary for managing the reservoir operation or mitigating floods or siltation but their necessary capacity is not more than 20 or 30% of the extreme flood. It is thus interesting for large dams to associate 3 spillways of similar capacities: low or high gates,
PK-Weirs, fuse plugs. Gates operators should not be permanent and the association may be very safe and cost effective.

The solution above reduces significantly the necessary gap between the PK-Weirs top and the dams crest.

Reducing the freeboard is very cost effective and increases by 20 or 30% the storage of most dams devoted to water storage and irrigation, i.e. the great majority of dams.

It is necessary to adapt the dam crest to the possible impact of exceptional waves. Concrete dams may withstand overtopping by such waves. It may be advisable to line the crest of embankment dams or to raise it by parapets or by steepened crest.

The principle and data of the traditional “Design flood” may wrongly prevent the utilisation of C.I.S. because imposing an unnecessary high freeboard. The “check flood” criterion should be much preferred.

– Ouamane A., 2005. “A new cost effective solution for most spillways”, Al-Azhar University.

– Ouamane A., Ben Said M., 2010. “Economic conceptions of the labyrinth weir allowing the improvement of the management of floods and the increase of the useful capacity of the reservoir” Rheinisch-Westfälische Technische Hochschule Aachen, Germany, pp 303-311. N° 158 ©2010 Shaker Verlag