As everywhere else in the world also in China reservoirs have made a tremendous contribution to multipurpose utilization of water resources thus creating benefits and mitigating disasters.Although the practice of constructing dykes or embankment dams along rivers has been well known through thousands of years in China, large scale constructing of reservoirs and dams was started in China in the 1950’s. Based on 26 years of statistics from 1954 to 1980 altogether 86,942 reservoirs in China have been built (except Taiwan) with a total capacity of 413×109m3. Reservoir are classified in China into four classes according to the storage capacity as shown in table 4.

Table 4. Classification of reservoirs due to storage capacity

3.4 % of all dams built between 1954 and 1980 failed. Among these dams which 98.3 % were earth dams and 96 % were small-sized reservoirs. Overtopping was the major cause of failure, which is understandable because of the low design flood criteria used for small dams. Causes of dam breaks and their percentages due to Chinese statistics are presented in table 5 and figure 8.

Table 5. Causes of dam breaks and their percentages due to Chinese statistics. 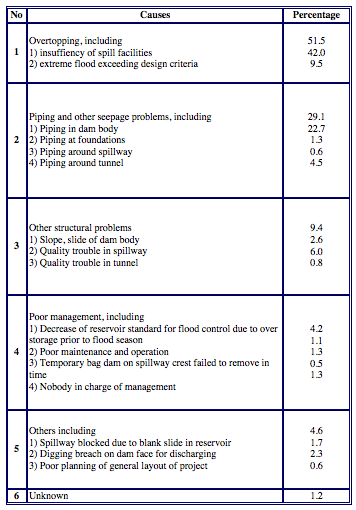 The Chinese statistics show well that in a tightly populated country also small dams may cause potential hazards and threat to human lives. China has a significant dam & reservoir building program of 200 to 250 dams every year: Due to the establishment of rules and regulations and the development of modern techniques in design, construction, operation and management, only a few dam break events have happened in China after 1980. The potential risk for dam fallures and related hazards is nevertheless well understood in China, and the research on dam break dynamics has been evaluated one of the most important tasks for future development.