F. Lempérière, France Within the 1973 ICOLD Congress, the General Reporter to the Question 41 did write (p.117 and 169 of General Reports) “The regulations — free the engineer from the responsibility of risks; I do not consider that this is a good method for it discourages the designer from scientific research —” and “The analysis of a large number of individual parameters for each dam, including the economy of the structure, allows the responsible engineer to decide his choice — An obligatory prescription is certainly more convenient and costs more, without giving any explanation of the real risk run”. These comments seem to have been valid along the past 40 years.

Official regulations or laws often add constraints and costs with the target of improving the safety; they may as well reduce the safety for reasons specific to dams:

–  The extreme diversity of the dams structures, foundations, floods, materials and failures risks is such that regulations may hardly be optimized for most of them.
–   Extra costs from regulations may be different for various solutions and they may thus favor wrong choices.
–   Regulations may prevent attractive new solutions.

Some examples are given below for floods control during operation or construction and for gravity dams.

One example of regulation: « Design Floods » for free flow spillways

There are about 40.000 large dams with free flow spillways. The most usual design criterion in the past was the so called “Design Flood”: the corresponding reservoir level is lower than the level corresponding to a probable failure by a Gap which includes a freeboard up to the dam crest and a possible nappe depth over the dam crest before failure. The value of the Gap is most often close to the nappe depth for the Design Flood; the nappe depth for the failure may thus be double and the discharge triple of what they are for the Design Flood. The probability of failure is thus much lower (by a factor such as 1/1000 or 1/10.000) than the probability of the Design Flood. Many ungated dams may thus withstand discharges beyond the PMF discharge even with a Design Flood of 1/500 and the storage of thousands dams could have been increased safely. The true safety of these dams is usually high and poorly represented by the Design Flood probability. Failures of free flow dams have been mainly due to a huge under evaluation of the design Flood discharge. 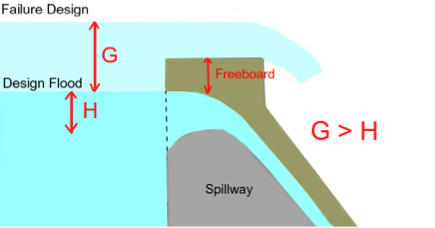 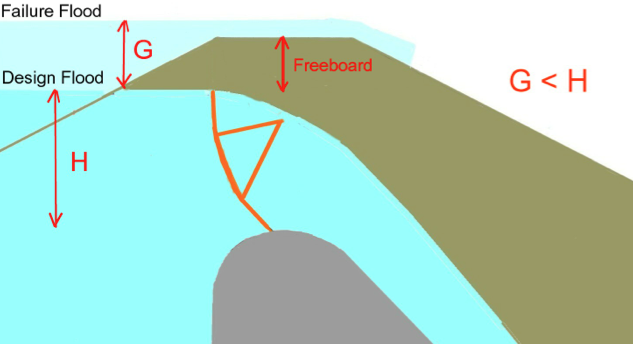 –  But an higher risk is often overlooked: the total gates jamming. The discharge over the closed gates is (5/15)1,5, about 20% of the Design Flood discharge, i.e. less than the yearly flood. And the probability of all gates jamming may well be 10-3 or 10-4. For many gated embankments, the true failure probability is not far from the “Design Flood” probability. And many large gated dams, with a Design Flood of 10-4 are less safe than ungated small dams based upon a 102 Design Flood.

Other drawbacks of the « Design Flood » criterion

A cost effective and safe solution for large discharges associates a gated and an ungated spillway. This is especially attractive with labyrinths which may discharge 50 m3/s/m with a nappe depth of 4 or 5 m. But this solution is not favored by the “Design Flood” criterion which overlooks a free flow spillway at the level of the top of gates. One of safest designs has thus been wrongly missed in the past. And the Design Flood criterion avoids an advisable analysis of the true risks and of their remedies: as example it overlooks the various possibilities of improving the embankments crest, i.e. of improving the safety at low cost. The “Design Flood” criterion has been an expensive lottery. It should not be legal, it should be avoided.

The Check Flood is a Flood of very low probability (or P.M.F.) for which the reservoir level is close to the level initiating the dam failure. Such criterion is logical; it requires more judgment and responsibility from the Designer than the “Design Flood” criterion. 90% of the loss of lives by dam failures have been from reservoirs over 10 hm3. A regulation could choose for the Check Flood, for instance, the P.M.F. (or 10-6 probability) for reservoirs over 10 hm3; its value could be reduced if incremental risks are low and for smaller reservoirs.

Which additional criteria to the “Check Flood” criterion

– It is also necessary to check that the probability of failure is lower from other hypotheses such as associating a 100 years flood with a partial gates jamming.

This solution which has applied to many existing dams may be wrong if the probability chosen for the “Design Flood” is low, such as 10-4 because the choice of solutions will be wrongly impacted by the Design Flood criterion and/or the costs will be higher than necessary. As example it may prevent the attractive association of a gated and an ungated spillway or the choice of a totally free flow spillway.

The two key criteria of design should be:

This will favor: 1) Free flow spillways up to a check flood of about 5.000 m3/s. This will be favored by modern labyrinths which may discharge 50 m3/s/m with a 4 m nappe depth. If mitigation of siltation or of floods is advisable, the yearly flood may be discharge by bottom gates. 2) Associating for larger Check Floods a gated spillway and a free flow spillway using labyrinths for 50 m3/s/m or fusegates for 100 m3/s/m. Totally gated spillways appear questionable. The choice of solutions may thus be very different from the choice based upon the “Design Flood” criterion; this may be much less expensive.

Which regulation or law for designing spillways?

They could be based upon the Check Flood but would also take care of gates jamming and other hypotheses and should not easily be adapted to the extreme variety of dams.

2) A much simpler regulation applying to all dams could refer to safety targets: for instance

An usual rule is to divert (most often by tunnels) a flood of yearly probability between 1/20 and 1/100; not surprisingly 0,5% of embankment dams higher than 30 m (or their cofferdam) failed by overtopping during construction. An apparently logical rule for improving the safety should thus impose a lower probability of diverted flood such as 1/500 but it is costly; and it favors an higher upstream cofferdam (most often poorly founded) and increases the dangerous temporary water storage: the safety improvement is thus questionable. A safer and less expensive solution may be to avoid any fixed rule and to design many dams (including embankments) for safe overtopping during construction. This applies especially well to the climate of Asia and Africa.

Designing dams for overtopping during construction

In Europe or North America floods to be diverted during construction are usually few hundred m3/s and require tunnels under 100 m2 section. In Asia or Africa, floods of yearly probability 1/100 are often thousands of m3/s. But they happen within a well known period of 1 or 2 months and there is a dry season of 7 or 8 months when possible floods have much lower discharges and may be diverted at low cost. The dam design and construction schedule may be adapted to a probable overtopping during one rainy season. It is easy for concrete dams but it is also possible for many embankment dams if they are leveled for overtopping about 10 m above the downstream floods level with a downstream protection such as R.C.C.

The Cua Dat Dam is a C.F.R.D. 120 m high. The 20 years flood is 5.000 m3/s during the rainy season but is under 1200 m3/s along 8 months of dry season. The chosen solution was to divert 1200 m3/s; thus saving 20 million $ of investment and shortening the program. A flood of 7.000 m3/s did happen; and the downstream protection of the dam in gabions was damaged and 300.000 m3 of rockfill washed away. Repairs required 10 million $ and 3 months (they would probably have been avoided if using R.C.C. instead of gabions). Even with a wrong choice of protection and an exceptional flood, this solution was less expensive than a traditional one with an usual flood. And with a traditional solution diverting 5.000 m3/s the damages and delays from the 7.000 m3/s flood would have been much worst than they were.

The schedule may be based as for Cua Dat upon a reduced diversion tunnel and overtopping of the dam during a flood season at low level and completing the dam during the next dry season. If it is a too short schedule for very high dams, additional diversion tunnels may be added well above the river level. They will be short, unlined, without control structure and excavated in one year by the equipment of the low tunnel: they will thus not be expensive. Over topping during one flood season may thus be a cost efficient solution even for very high embankments.

– The main quality of a gravity dam is the gravity; the required strength or imperviousness may be lower than for thin structures. However from 1920 to 1980 specifications and regulations have progressively increased the required quality of concrete beyond real needs and the cost per m3 has most often be higher than necessary, especially for reaching a quite perfect imperviousness. This has favored less safe embankment dams or thinner concrete structures such as buttress dams or multiple arches of which two per cent failed. – And many prevailing specifications and regulations did not accept the various R.C.C. solutions; R.C.C. was technically possible and economically justified in the fifties, used for roads in the sixties, developed for dams in the eighties. It could have been totally overlooked. The excess of regulations has been detrimental to economy and to safety.

Since 30 years there have been worldwide more fatalities of workers during dams construction than fatalities from dam failures. For 1000 dam workers, there may be yearly 100 accidents, 10 permanent disabilities and 1 fatality but these figures may vary significantly with sites conditions and care of safety. National laws on workers may be easily adapted to all dams. ICOLD could impact on this problem through:

–   Disseminating freely and updating the Bulletin 80 (which few people have read worldwide)
–   Creating a specific technical ad’hoc Committee
–   Suggesting great care of this problem in the choice of technical solutions, contract clauses, construction schedules
–  Including in technical reports on dams the rate of workers accident.

Dams should not be designed by laws and computers; they should be designed by the experience and judgment of Engineers. Possible laws or regulations for dams safety should preferably focus on safety targets, not on design methods. Laws for workers safety may be efficient and easily adapted to all dams.