1Chairman of Hydrocoop, France – Honorary Chairman of the French Committee on Large Dams

Most European dams have been built fifty years ago: corresponding design criteria were based upon knowledge and solutions which did prevail and were far from present knowledge and available solutions. Old criteria which remain used in many countries may thus deserve an in depth review and using them for official regulations is much questionable. Two examples are analysed below: spillways and floods control during construction.

Regulations or usual design criteria prevailing in various countries may be very different even when recently revised. Many associate a “Design flood” with an arbitrary reservoir level and a freeboard chosen by regulations, habits or waves analysis. Methods for flood computation may also be very different. Applying these various national criteria for designing a same dam may result in floods discharges and freeboards which may vary from 1 to 3. It may thus be justified to review in depth all these criteria which may all be questionable as well as corresponding regulations.

The review should answer to 3 questions:

–    Which is the problem? i.e. which are the actual risks for the various dams, especially referring to the analysis of reasons and impacts of reported failures?

–   Which may be the targets of regulations and how to reach them at lowest cost?

1.1. Which is the problem? Facts about failures

About 2% of all world dams failed by floods but the risks were very different for various gravity and embankment dams and according to the material, to the climate and to the construction year.

–     The safest dams have been the high concrete gravity dams: no failure by floods has been reported from over 1000 dams higher than 30 m, probably because they may usually withstand safely overtopping; but undrained lower dams cannot withstand a level increase by some m (Zerbino Dam, Italy, 16 m high).

–     The most dangerous dams have been the masonry gravity dams: about 2% failed, mainly 20 to 30 high. Failure was sudden and wide, possibly in the dam body and sometimes before overtopping.

–     Many embankment dams may withstand a few hours overtopping by some dozens m3/s (possibly up to a 0,5 m nappe depth): this saved many dams in moderate climates but in Asia discharges may reach 100 m3/s even for very small catchment areas. Failure of embankment dams is usually by significant overtopping, erosion of the downstream toe, creation of a breach which widens quickly in poorly compacted materials and slowly in modern clay cores or dams. The most dangerous failures were from dams poorly compacted lower than 30 m with breaches up to 500 m and discharges close to 100 000 m3/s!

The reported failures by floods causing over 100 fatalities are: 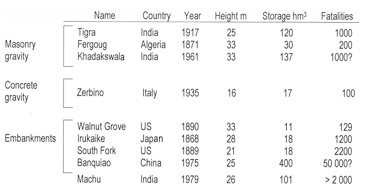 Accidents from floods with over 100 fatalities

These dams were lower than 30 m, reservoirs were over 10 hm3.

If the dam failure happens for an umprobable flood, such as for a 10-4 probability, the downstream damages from the natural flood may already be very important, and the incremental damages and fatalities from the dam failure rather reduced. This impact varies significantly with the dam material as per the figure 1: 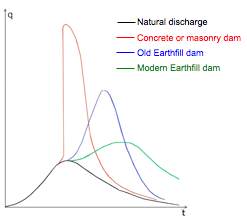 –   Most failures by floods have been caused by floods discharges higher than the spillways capacity which was often under designed 50 years ago. And all present methods for evaluation of floods remain uncertain, especially for extreme floods and the true probability of reaching a huge discharge is for many dams much higher than according to the theoretical probability. A great margin of safety may thus be justified for choosing the spillways discharges.

The extreme flows q reached worldwide are very high and are given below accordingly to the catchment area S:

And the climate warming will increase significantly the temperatures within the life of most dams and increase the possible discharges in many parts of the world, including those where extreme specific discharges are presently rather low.

And a significant part of failures linked with floods have not been caused by a flood beyond the spillway capacity design:

–   Gates jamming and especially total gates jamming for mechanical, electrical or human reasons has caused the failure of a significant number of dams.

–   Floating debris may reduce significantly the discharge and caused some failures.

–   Failure or wrong operation of an upstream dam caused some per cent of failures: failure of natural reservoirs may be a risk, for instance in the Himalayas.

For all the reasons above and the extreme variety of specific data of each dam, it is difficult to regulate this problem by a simple rule and even to classify the risks. As examples, a gated masonry dam 20 m high or an old embankment dam 50 m high with bottom gates are much more dangerous than free flow very high concrete or embankment dams.

For reducing the probability and/or the impacts of failures by floods, there are 2 basic ways analysed below: increasing the spillage capacity and adapting the dam structure to higher reservoirs levels or to overtopping.

1.2.1 There are now 3 solutions for floods spillage

–   Gates which have two advantages: facilities for managing the reservoir justifying a gates capacity up to about the yearly flood and reduction of spillway length by large specific discharges (in the range of 100 m3/s/m). They have three drawbacks: the cost including civil engineering, operation and maintenance and the risks often overlooked of total jamming or wrong operation.

–   Free flow spillways: the main old drawback of a low specific flow is now much reduced by the modern labyrinth designs which may discharge 50 m3/s/m for a nappe depth of 4 m or 5 m (figure 2).

–   Various cost effective fuse devices (Earthfill, concrete fuse plugs, fusegates …) to be used for floods of low probability: they may be used for small dams or very large ones and discharge up to 100 m3/s/m after tilting (figures 3 and 4).

The utilization of gates may thus be significantly reduced in the future, with most dams using a free flow spillway or associating gates with free flow spillways or fuse devices. The design criteria or regulations should favour such an efficient choice. 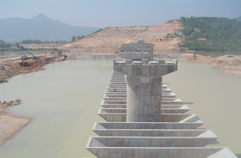 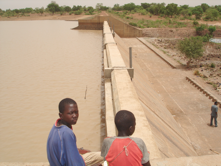 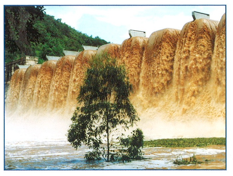 Structural improvements of the dams may be very cost efficient for withstanding larger floods: they are totally different for concrete gravity dams and for earthfill or rockfill dams.

–   The traditional cross section of gravity dams is far from optimum for earthquakes or exceptional floods and most gravity dams could also be designed for a possible overtopping beyond the spillway: reducing the freeboard, using concrete fuse devices, accepting overtopping are possible alternatives. It seems thus possible to reach extremely safe structures at a reasonable cost but with an overall method of design which may be different from the traditional one: as failures of such dams are very dangerous, PMF should often be the rule, even for dams 20 m high and the structure could be fully adapted to overtopping by extreme flood.

–   Earthfill dams overtopping may be acceptable for low dams and limited specific discharges (few m3/s/m) with some protection of the downstream slope by grass, RCC or concrete elements as advocated in U.K. For large discharges the usual target is to avoid overtopping by the spillways capacity. It may be accordingly cost efficient to improve the upper part of the embankment corresponding to the freeboard: raising it by a steeper slope, avoiding leakage and erosion by a moderate overtopping nappe depth. If a failure happens for a flood of very low probability, the natural flood will usually cause huge damages downstream before the dam failure: it may be possible at low cost to reduce the incremental damages from a possible dam failure through choosing the place of overtopping: it is possible if lowering the crest level where the dam height is reduced or placing a fuse device for initiating there the failure. This safety measure, associated with an alarm system used also for natural floods, may be very efficient; this applies mainly to earthfill dams because most are long and the lay-out may be adapted at low cost as per figure 5:

–   For rockfill dams, which are usually higher and shorter than Earthfill dams, overtopping of the crest and lining in reinforced concrete the downstream slope may be a solution for an additional spillway. Another low cost solution for an emergency spillway may be an unlined quite horizontal tunnel with upstream control by fuse devices.

1.3. Which may be the design criteria or regulations for spillways?

The great uncertainty in evaluating extreme floods and the climatic change justify a significant margin in the spillage capacity. And reasons of failure such as gates jamming, floating debris or failure of upstream reservoirs (including natural ones) should not be over looked.

The criteria should be adapted to very different dams data and risks. They should favour a large choice between the great number of structural or spilling possibilities.

The first possibility is to fix a target of safety and to leave full choice to the designer for meeting this target. Such target may be adapted to each country but should take in account the reservoir data (and especially the storage) and the downstream impact of a failure (and especially the incremental impact).

As example, the overall true yearly probability of dam failure, for any reason linked with floods, should be less than:

The acceptable probability may be multiplied by 10 if the incremental downstream risk is low.

Such a general target may be associated with few precise technical rules such as:

–   The dam should withstand, all gates open, a “Check Flood” such as the evaluated PMF (or 1,2 PMF or 0,5 PMF according to the reservoir size and downstream data)

–   The dam should withstand, all gates closed, a flood of yearly probability 1/10.

These criteria apply well to the great variety of dams and leave the possibility of using various solutions for optimizing the cost.

But criteria or regulations which are not well adapted to most dams or which prevent cost effective solutions should be avoided: the traditional criterion of the so called “Design Flood” is thus very questionable.

–   It does not represent well the true safety: the true margin of safety is much lower for a gated dam than for a free flow spillway. Fully gated dams are favoured and their risk of total gates jamming overlooked.

–   It does not favour structural improvements which may be efficient with various low cost solutions.

–   It prevents for large extreme discharges the cost efficient association of a gated spillway (for instance for half of the extreme total discharge) with a labyrinth free flow spillway or with fuse devices.

The traditional criterion based on the so called “Design Flood” should preferably be forgotten but it should only be checked than a flood of yearly probability 1/100 or 1/500 may be discharged in normal conditions without significant damages. This should be added to the Check Flood criterion and the criterion of gates jamming.

–   The traditional criterion in many countries is to divert (usually by tunnel) along one or few years a flood of yearly probability 1/20 or 1/100; the upstream cofferdam may be high. Consequently more embankment dams higher than 30 m failed by flood during construction than by flood during operation. And this solution, quite traditional in industrialized countries may be unadapted to many countries, especially in Asia or Africa where the discharge of a flood of 1/100 probability may be very high with a costly control.

As in these countries the dry season is usually close to 8 months, it may be much safer and less expensive to divert only the flood of 1/100 probability of the dry season and to accept overtopping of the dam during construction.

–   For concrete dams, overtopping may be foreseen at various construction stages.

–   Rockfill dams (and corresponding upstream cofferdam) should be levelled during a flood season some m over the river level.

The overall cost of this solution is lower and, in case of an umprobable flood during construction, damages and downstream risks are lower than with failure of the high upstream cofferdam of the traditional solution. This has been proved successfully in Vietnam.

It should thus be a mistake in many countries to impose during construction the traditional design criterion.