Concrete fuse plugs are simple massive blocks placed side by side on a spillway sill. They are free standing and stable until the water level in the reservoir reaches a certain elevation and they start tilting when this elevation is exceeded. They may be designed to tilt before being overtopped and, in such a case, will have a significant height compared to their thickness.

The present appendix only dealt with concrete fuse plugs which require a significant overtopping before tilting. Such fuse plugs can be designed for overtopping by quite a significant upstream depth  ”h” which can be several times the block height “P”. This type of fuse plug has a significant length and thickness compared to its height. Its upstream upper corners may also be trimmed to ease overflow discharge. Model tests have shown that floating debris has no significant effects on the water levels at time of tilting.

Elements, or blocks, placed on the same sill may have the same height but different thickness, so that they tilt at different water elevations. The water elevations for tilting can  be calculated based on horizontal water loading combined with predictable uplift pressures. To ensure that the magnitude of uplift pressure under each block develop as required, a hollow area can be provided under each block which is wide open at the upstream side and completely closed and watertight at the downstream side, as shown on Fig.1. To ensure that the blocks are correctly bedded in normal use and before tilting, it is necessary to use few unsealed supports under their upstream parts.

Model tests suggest that intermediate walls should preferably be placed between the fuse plugs. These walls, which can be designed as a part of the spillway sill, will help maintain the water nappe over those plugs adjacent to the tipped one. This will also ensure that the water elevations triggering the tipping of each element can be calculated and predicted more accurately. These walls do not need to be very large or thick to be efficient. General arrangements are shown on Figs. 2 to 4. At least 4 to 5 blocks of different thickness should be used along a spillway to give a progressive tilting as the water level rises.

To ensure correct tilting and avoiding sliding, each block should preferably abut two small support ridges, or abutments, fixed downstream on the spillway sill, for instance as shown in Fig.1. Alternatively inclined steel bars can be used, anchored into the sill.

Block extremities must be designed to avoid friction against adjacent blocks or the separating walls. This can be achieved in different ways such as by chamfering the extremities so that one face is slightly longer than the other, see Fig. 3.

It is advisable to ensure correct aeration of the water nappe to avoid vibration. This is usually simple to achieve by means of pipes embedded into the intermediate walls. 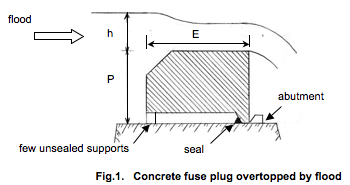 Model tests already performed have helped establish the ratio between the thickness of a block and the water level at time of tilting. For preliminary purposes, the simplified formula:

h = the upstream water depth over the fuse plug

E = the upstream to downstream base width of the fuse plug, and

P = the height of the fuse plug

This relationship may be used for blocks having the same general shape as described above, with a hollow section of about 10% of the block height P and with a concrete density in the order of 2.3 t/m3.  A block with a thickness, E, equivalent to 1.5 times its height P, tilts at a nappe depth h, which is approximately 1.1 times height P. Concrete density variations of 5% will lead to variations of about 10% in the nappe depth at the time of tilting.

Blocks can be prefabricated or built in situ. In the case of blocks built in situ on an existing spillway, they can be built, for instance, using a clay plug for improving downstream water tightness, see Fig.5. The construction phases shown on Fig.5 comprise:

2. Laying materials to form the chamber. Such materials may be of any kind provided they are easy to remove after block concreting. At the downstream extremity, clay or clayey sand will be used to plug possible leakage at the seal location.

3. Laying of a plastic membrane above the materials and under the downstream plug area..

5. Taking out of the materials (except the downstream plug) using few unsealed supports. 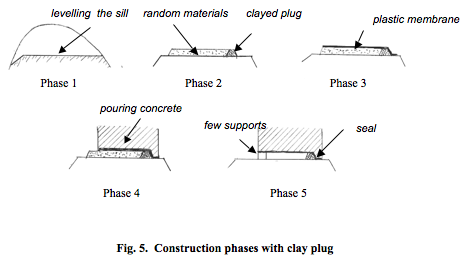 Another solution for downstream water tightness may be, instead of using a clay plug, to lay a rubber seal on the spillway sill, underneath the downstream extremity of the block, see Fig.6.

Concrete Fuse Plugs may be used for new dams. In such case, it is possible, with about the same quantity of concrete and cost, to double the flow of the extreme flood discharged through the spillway.

They may also be used to improve existing free overflow spillways either by increasing spillage, after lowering the sill, or by increasing reservoir storage (installing higher units) or by combining both, as shown on Figs. 7 and 8.

When fixing the design criteria and determining at which flow each block will tilt, the designer has to face two opposite constraints:

– for economic reason, not allowing the blocks to tilt too frequently and lose water

– for safety reason, to keep a reasonable freeboard between the dam crest and the water level at the time of tilting in the case of the last block.

These criteria have of course to be fixed case by case, depending on local data and on the objective being pursued, but experience has shown that most often:

– concrete fuse plugs should be designed to tilt at floods of between about one in 20 yrs and one in 100 yrs, or more.

– when heightening an existing free overflow spillway, the block height should not exceed more than about  0.25 times the distance between the embankment crest and the  spillway sill.

After the tilting of one or several blocks, their replacement by fabrication of new blocks may take some time, during which corresponding possible water storage is lost. To remedy such situations, it is possible to use temporary flash boards, such as wood boards supported by steel pipes, until new blocks are placed.. That can be achieved very quickly, even the day after the flood, provided that appropriate fixing holes for the pipes have been previously drilled into the spillway sill, before placing the initial concrete fuse plugs and provided that some low cost pipes and boards are stored and available.

Generally, less than 1 m3 of new concrete blocks are necessary in order to increase discharge capacity by 1 m3/s. For an existing free overflow spillway, that also implies that, for each 1m3/s flow increase, about 2 m3 of concrete will need to be removed for every 1 m3 of replacement block. In the case of new dams, it means that using blocks instead of a Creager sill, for each  1 m3/s of flow increase, there will also be  a concurrent net saving of around 1 m3 of concrete.